Home Article Q: Looking back, what are the most thrilling memories, which you still...

A: Of course, memories of old keep haunting me. I treasure these thrilling memories. They are now a part of me and will remain with me till the end of my life. The first thrilling event, which I still vividly remember was my dramatic escape from the steamer. It all happened like this: it was Sunday March 13 1910. I arrived in London from Paris. I was immediately arrested at the Victoria Terminus by the London Police. The arrest was made under atelegraphic warrant from the Bombay Government. I was held under the Fugitive and Offenders Act of 1881. The charges against me were: 1) Waging war or abetting thewaging of war against His Majesty, the King Emperor of India; 2) Conspiring to deprive HisMajesty the King of the Sovereignty of British India or a part of it; 3) Procuring and distributing arms, and abetting the murder of Jackson, the then Collector of Nasik; 4)
Procuring and distributing arms in London and waging war from London; 5) Delivering seditious speeches in India from January 1906 onwards and in London from 1908 and 1909.

I was put on the steamer S.S. ‘Morea’ bound for Aden. I was a prisoner of the British in the steamer. And I realized what my fate would be once I reached homeland. So, I decided to escape from the jaws of death. Luckily for me, the steamer anchored at Marseilles for

repairs. I now made a dramatic decision, to escape somehow from the steamer. So I went to the bathroom and bolted the door from inside. My guard waited outside. I jumped fromthe porthole into the sea and started swimming towards the harbor. The guards opened fire. And bullets whizzed by. I dodged them by diving, and cheated death. At last, I reached theharbor, and climbed the quay. I was happy that at last I was on the soil of France—a free man. But fate was cruel and unkind. The British guards pursued me and dragged me back to the steamer—clearly a breach of International law—for I had been arrested on a foreign land. Madam Cama and Ayyar who had planned to rescue me arrived in Marseilles by car late by a few minutes. They must have cursed themselves when they heard that I was captured after my dramatic escape.

The second episode, which lingers in my mind is when I was sentenced on two occasions for transportation for life. This meant that altogether I had to remain in the Andaman’s Cellular Jail for fifty years. If I had served my full term of imprisonment, I would have been released on December 24, 1960. But I was sent to Hindustan after 14 years in the Andamans to be interned for 13 years in Ratnagiri. Altogether, I remained a prisoner of the British for nearly 27 years.

The third event, which I shall always cherish, was when I met my young patriotic brother and my noble wife in cellular jail for the first time in 8 years. The Government had permitted  them to see me in the Andaman Jail. How can I express in cold words what I felt then? Anyhow, I was supremely happy to see and talk to my wife, who shared with me the sorrows and agonies of a revolutionary’s life. 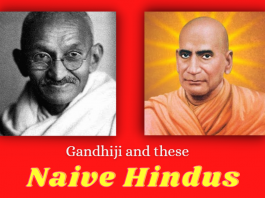